In 2015, we collaborated with Lausanne Collegiate School in Memphis, Tenn., to design a world-themed playground. Today, we’re happy to have Kara Barbour, head of lower school, as our guest blogger discussing how the school brought students into the playground planning process through their project-based curriculum. 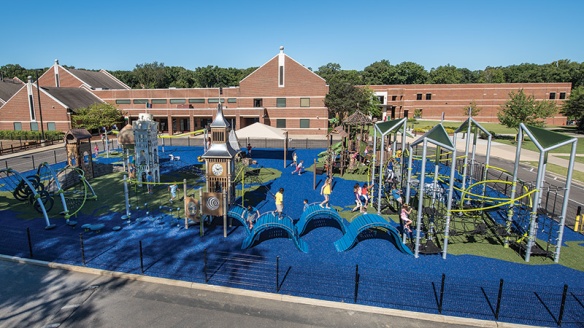 At Lausanne Collegiate School, the Lower School (PK-4) engages in a daily block of project work. Each Lower School classroom is in charge of three projects throughout the year, dedicating six to eight weeks to each project. Our goal with this project-based learning was to get students asking questions and researching a particular topic.

The third grade classrooms are focused on inventions projects, during which they start to investigate how things are made, hear from entrepreneurs, etc. The students work in groups of three to four to come up with an invention, and then they go to the idea labs to start sketching things out and building prototypes to determine if their idea will work. 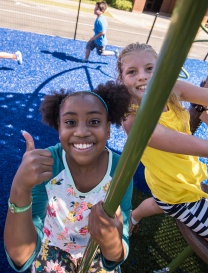 When we decided that we were going to install a new playground, we really wanted to get the students involved and decided the third graders and their inventions unit would be a perfect fit. Each of the small groups put together a proposal, and so many of their ideas were actually things that Landscape Structures had already started working on.

We first revealed the playground drawings to the third graders. They squealed with delight to see their ideas turned into reality. We then gave them the opportunity to share the drawings with the rest of the school during a student assembly, and even had a few students share the plans with the parent group. The third graders feel that the playground came to be because of the work that they did.

The playground opened in August 2015, just before school began, and the third graders took part in the official ribbon cutting. All of the students at Lausanne love the new playground—even fifth graders are attracted by it. It’s been quite the magnet for the entire community.

How do you #MakeYourMark on the playground? As an internationally diverse school, Lausanne Collegiate School aimed to demonstrate its global brand on the playground. See below for a few of the featured landmarks that represent the world, then visit playlsi.com to learn more about their world-themed playground design. 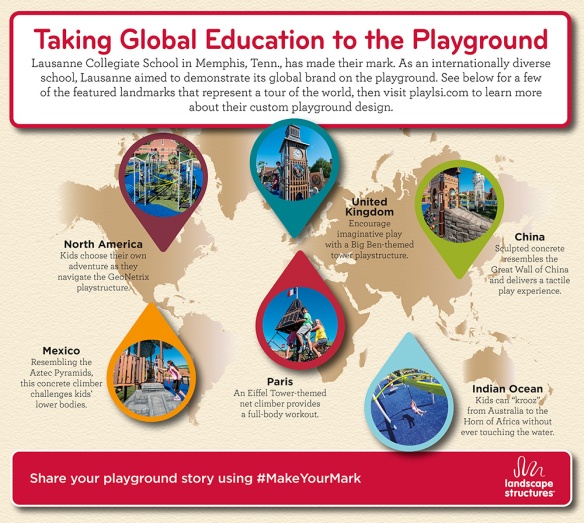 We helped Lausanne Collegiate School in Memphis, Tenn., create a playground design to reflect their culture as an internationally diverse school. Hear from our custom playground designer, Jonah Scholen, about how he collaborated with the school to create the playground of their dreams. The end result? Students at Lausanne can run all over the world without ever touching the ground.

Solution: Lausanne collaborated with their local playground consultant, Recreational Concepts, and Jonah to create a world-themed design. The playground includes 14 different playstructures that represent a tour of the world on safety surfacing designed to mimic a world map. The playground includes the ZipKrooz™, which takes students from the Horn of Africa to Australia. Plus, climbable replicas of Big Ben, the Eiffel Tower and the Taj Mahal provide opportunities for kids to interact, engage in imaginative play and discover the world beyond them while staying active. 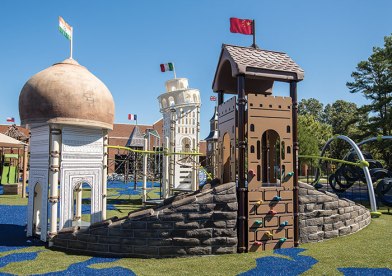 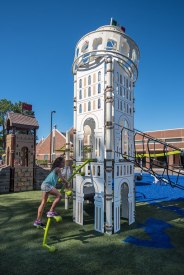 Read more about how the playground at Lausanne Collegiate School has become a space to play and learn.