We’re excited to announce that the Early Risers Kiwanis Club of Worthington, Minnesota, is the winner in the 7th Annual Legacy of Play contest. The club, which will receive $25,000 in playground equipment, plans to build an all-inclusive playground at a local park—the only playground of its kind in the community of 13,000.

The club garnered community support for the project, including financial help from a local man who had polio as a child and remembered feeling left out while watching other children play. The club’s contest application noted the resident offered to transport the playground equipment at no cost to the club, using his personal trucking company equipment.

A local family whose son has Joubert Syndrome, a rare genetic disorder, also supported the playground project. In a letter that accompanied the club’s contest entry, the family wrote, “Since three months old, Blaine has been in physical, occupational and speech therapy and has made some great strides in his coordination and strength. Play and peer relationships are also such important parts of development. What an all-inclusive playground will mean for us is that Blaine will be able to explore and wander the playground independently, he will have more opportunities to be engaged with other children and hopefully make a new friend.”

The family noted their child would be able to use the playground equipment independently and play with his siblings and others. “When we talk about the park with Blaine and show him pictures of what is coming, he gets excited and will give a shrieking shout of “Yay!” and then tap his chest and say, “Me too, I can do it, I can play.”

Plans call for the playground to be installed on Kiwanis One Day on Oct. 24, 2021. The club plans to begin construction on April 1 of next year, in tandem with the city’s construction of a new handicap accessible restroom facility.

We’re excited to announce that the Kiwanis Club of Marietta, Ohio, is the winner in the 5th Annual Legacy of Play contest. The club, which will receive $25,000 in playground equipment, plans to renovate the community’s nearly 30-year-old playstructure to make it inclusive for the entire community, giving children of all abilities a safe environment to gather outside to socialize, grow and play.

“This award is going to be such a boost,” said Marcia Stewart, who managed the Kiwanis Club of Marietta’s entry into the contest. “We’re so grateful to be able to spearhead this inclusive playground project.”

Marietta is a historic, charming riverboat town nestled in the rolling hills of the Mid-Ohio Valley. The city served as the starting point for westward expansion by early pioneers, and the design of the all-inclusive Northwest Territory Community Playground will pay tribute to the area’s first settlement. From themed and inclusive playground equipment, embedded historical facts and an artifact seek-and-find activity, adults and children in the community will have the opportunity to learn about the area.

We’re excited to see this inclusive playground vision come to life over the next year. The Marietta Kiwanis Club hopes to complete the Northwest Territory Community Playground on or around Kiwanis One Day in October 2019. Stay tuned for updates along the way.

A fourth grader who uses a wheelchair will soon get to play on the playground with her friends. Her story helped convinced a panel of judges to award the Mankato Downtown Kiwanis Club $25,000 worth of inclusive playground equipment in the Legacy of Play Contest, sponsored by Landscape Structures Inc. and Kiwanis International. The award will be used to develop the Fallenstein Playground, an all-inclusive playground where children and families of all abilities can develop, discover, laugh and experience the joy of play.

Mankato, 75 miles southwest of Minneapolis, is renowned for its great parks and trails, and offers breathtaking landscapes of rivers, lakes, ravines, bluffs, natural prairies and forested areas. With a population of nearly 41,000, Mankato offers small town living in a thriving regional center. The all-inclusive Fallenstein Playground will be located adjacent to Fallenstein Field, the fully accessible baseball field used by the Miracle League of North Mankato, in Caswell Park.

The Mankato Downtown Kiwanis Club will complete its inclusive playground project on or around Kiwanis One Day in October 2018. Learn more about the project.

We’re excited to announce that children and families with special needs in Poplar Bluff, Mo., will benefit from $25,000 in playground equipment won during the international Legacy of Play® Contest. The $25,000 award will help complete the City of Poplar Bluff’s main recreation space, Kiwanis Bacon Memorial Park, with inclusive playground equipment to accommodate children and families with special needs from the five surrounding counties.

Poplar Bluff, known as “The Gateway to the Ozarks,” is located along the Black River in Southeast Missouri. With a population of more than 17,000 residents, Poplar Bluff is the county seat and regional hub of education, health care and business. 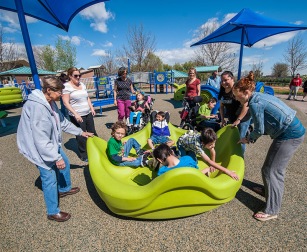 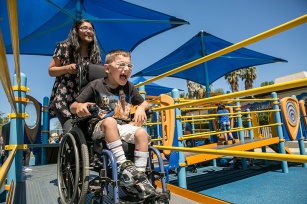 “We are thrilled to have been awarded $25,000 for our inclusive playground project,” said Subrina Berger, president of Poplar Bluff Kiwanis club, who spearheaded the contest entry. “With the help and faith of our incredible Kiwanis club, we finally met the goal we set two years ago to create a space in Kiwanis Bacon Memorial Park where children with special needs, toddlers and older kids can play together without fear of being hurt or left out. I speak for the entire Poplar Bluff Kiwanis club when I say how much we appreciate this award.”

The Poplar Bluff Kiwanis club will complete its inclusive playground project on or around Kiwanis One Day in October 2017. One Day is Kiwanis International’s signature day of service during which many clubs participate in service projects benefitting their local communities.

Learn more about our partnership with Kiwanis International during the 101st Annual Convention June 23-26 in Toronto.

Earlier this year, we hosted the Legacy of Play Contest along with Kiwanis International to bring a playground to a deserving community. The winner of the contest was the Kiwanis of Ottawa, Ill., who received $25,000 in Landscape Structures playground equipment.

Ottawa, Ill., is home to more than 18,500 people, and 13 percent of the community’s children live with a disability. However, Ottawa does not have a park that welcomes children of all abilities. In order to change that a group of volunteers founded PROJECT INCLUSIVE, and their first project was to build an inclusive playground in an existing city park. The goal of the project is to reimagine an area that fosters relationships, family and pride—allowing PROJECT INCLUSIVE to shine for all members of the community.

Now, six months after the Legacy of Play Contest award was presented to the Kiwanis of Ottawa, Ill., the group is well on their way to making their dream a reality. PROJECT INCLUSIVE is developing the project in two phases—first, the freestanding play components and second, the inclusive playstructure. And if all goes as planned, the community of Ottawa will have the start of their inclusive playground by early next summer!

In June, we awarded the Iola Kiwanis club in Iola, Kan., $25,000 in playground equipment as part of the Make a Difference Through Play contest. We’re happy to share another update from Michael Ford, member of Iola Kiwanis and community resource officer for the Iola Police Department.

Our last update was in mid-December, and plans for our inclusive playground have been moving fast since then. Our fundraising got a big boost at the end of 2013 through a couple of grants and individual donors, and now we’re moving quickly towards the installation.

We’re hoping to install the playground on April 5-6, during Kiwanis International’s One Day—weather depending, of course. And will build the playground with the help of community volunteers. Groups within the community have come to us to ask if they can participate. We’ve got volunteers from a local bank and church, the police station, the M.O.M.S. group as well as their friends and family, and the Iola Kiwanis Club. Even more than helping with the manual labor, people are offering to help with lunches and even the Girl Scouts are hoping to be there to help cheer on the rest of the volunteers.

Our playground consultant from ATHCO, L.L.C. and the Iola Parks and Recreation Department have helped coordinate the installation, and we’re targeting a two-day build. Following the build, we’ll tackle the site work and surfacing installation. Everyone in Iola—from kids to adults—is excited to see this project come together and looking forward to playing on the inclusive playground this spring.

Iola Kiwanis club in Iola, Kan., is the winner of the Make a Difference Through Play contest! They won $25,000 in playground equipment from Landscape Structures for their essay submission describing why their community needs a new playground.

The City of Iola is situated along the Neosho River in Southeast Kansas. With a population of nearly 5,700 residents, Iola is the largest town in a tri-county area. The City’s main recreation space, Riverside Park, is home to many amenities including a pool, athletic fields and a playground. The $25,000 award will allow the opportunity to create a playground that will accommodate children and families with special needs. The Iola Kiwanis club is collaborating with other local organizations—M.O.M., Iola Pride Committee, Iola Wal-Mart volunteers and many more—and plans to install a safe and inclusive play environment that will welcome all abilities.

The Iola Kiwanis club will complete their inclusive playground project on or around Kiwanis One Day, April 5, 2014. One Day is Kiwanis International’s signature day of service during which many clubs participate in service projects benefitting their local communities.